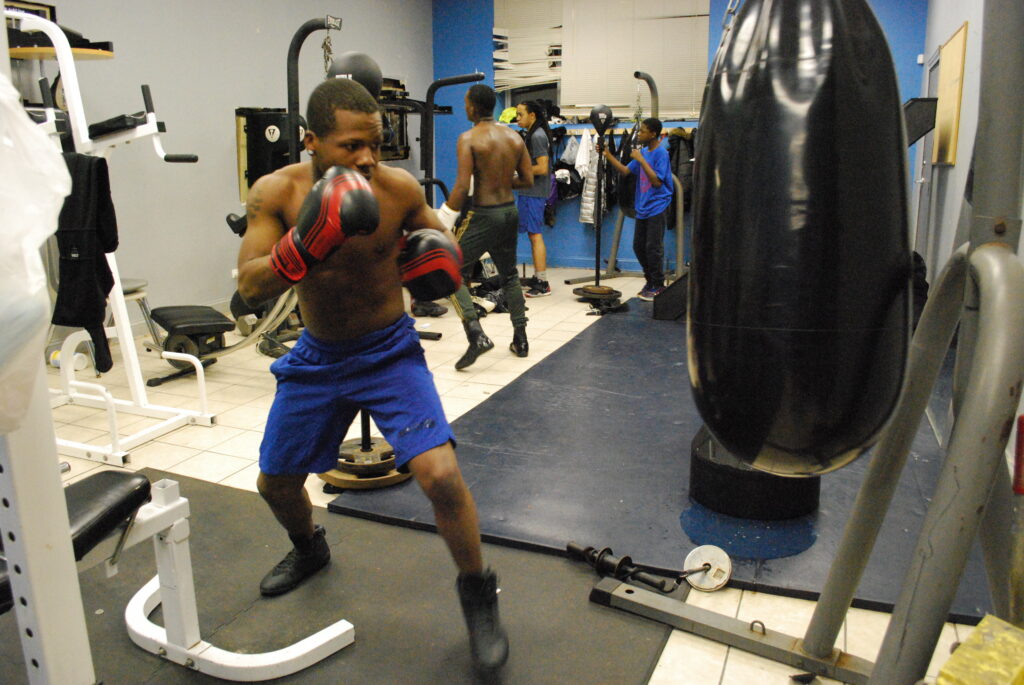 The problem was, he had just been shot – for the third time. And that really made him mad.

“I’m just angry! I’m just emotional,” Devontay Williams explained to the men surrounding him. After all, he and four others had just been shot the previous weekend, marking the third gunshot wound he’d suffered in his 22 years of life.

That’s enough to make anyone mad, isn’t it? But Williams’ coach wasn’t buying it – and his mentors weren’t either.

“You come in here and act an ass!” said Eric Hill, mentor and outreach worker.

“I heard you say you were gonna shoot,” said mentor Kevin Johnson. “I heard it, I’m not making it up!”

“One thing we take seriously,” said Hill, “is threats.”

Then Derek Brown, Williams’ boxing coach, spoke. “You come back and give the same disrespect . . . You automatically blew up,” Brown said.

It’s not that Brown doesn’t understand what Williams was feeling; his life, in fact, was once remarkably similar to Williams’ life – one choked by anger and hurt, and repeatedly marked by violence. But though he understands Williams’ hostility, Brown can’t accept it – especially not here, at Boxing Out Negativity.

That was the scene I encountered the first time I visited Boxing Out Negativity, headquartered in a makeshift West Side boxing gym at 1532 S. Pulaski Road. No one paid much attention to me and the confrontation continued, uninterrupted. Half a dozen older adults focused on Williams and he had no choice but to listen – no choice, that is, if he wanted to keep boxing.

The group was gathered behind a partial wall that split the main boxing gym from a smaller space in back. Coach Brown’s wife and son were sprawled across an oversized bean bag chair while most of the others stayed standing.

At stake was Williams’ future at Boxing Out Negativity.

He’d already caused repeated problems and had earlier been suspended from participating. Williams isn’t only a gunshot victim – he has also served time and has multiple arrests, including in May and June of this year on resisting arrest and drug charges.

That kind of background is common among the young people Coach Brown recruits. But now Williams had “exploded,” confronting Hill during a group activity and “disrespecting him, cursing him out, threatening him,” Brown said.

At one point Williams denied the disruptive behavior, but a moment later he gave a hint of his angry side. “Ain’t nobody gonna call me no bitch!”

Williams’ hostility, the men told him, was unacceptable.

“You supposed to be stepping up,” Coach Brown told him. That was particularly true because at 22, Williams is admired by some of the smaller kids at Boxing Out Negativity, which takes in youths as young as 8, Brown said.

“You saying I’m a role model to other people – I understand that,” Williams said. “I haven’t been disruptive. . . I feel like everybody’s jumping down on me.”

“You got your guard up, like you in the ring,” said mentor John “Boots” Roy. People who are disrespectful are “dangerous,” Roy said, and “when you disrupt the class you’re disrespectful . . . What’s gonna be different if we allow you to come back?”

“My attitude,” Williams said, and he vowed to be “quiet and more focused.”

As their talk came to a close, Roy offered a final piece of advice:  “I used to be like that – defenses up. You gotta diagnose yourself, be your own psychologist now and then. . . I have to do it often myself. Dig down.”

Soon the decision was in:  Williams could stay.

That scene unfolded on September 8th and for more than two months now, a bullet has been lodged in Williams’ shoulder, a painful obstacle to his boxing aspirations. He was first shot at age 16 and this year has the dubious distinction of being shot in two separate “mass shootings” that made headlines – one on July 21st and one over Labor Day weekend on September 3rd, the week before his mentors confronted him.

Since then Williams has improved in the program, Brown said – and last month he even spoke to a class on “Gangs and Society” taught by Julie Globokar, the Chairman of the Board of Boxing Out Negativity.

There Williams gave a glimpse of the West Side’s violent side to students at Concordia University Chicago, telling them “I’m tired of seeing people die.”

This month Williams was actively training in the gym and Coach Brown observed that despite his disruptions, “he keeps coming back for something.”

A key issue, Brown said, is “he’s pretending to be something he’s not. I call it ‘The Mask.’ His mask is being a gangster. A lot of people have that mask on every day.”

Brown once wore that mask himself and with it came a lot of what he calls “self-inflicted pain,” the pain of harsh street life, prison time and gunshot wounds. In the West Side’s North Lawndale neighborhood where he lives and works, Brown sees that pain in young men like Williams again and again and again. He sees that they’ve been repeatedly subjected to violence inside and outside their homes; that they are most often fatherless; and that Chicago Public Schools have failed, miserably, to educate them.

Brown calls it “the Hurt Hurt Syndrome” and says at his program, “we’re practicing the Love Love.” That might sound ironic for a program centered on an aggressive sport, but the coach says boxing provides “sneak discipline” that requires participants to develop focus, work consistently, and build comradery and team spirit.

It also exposes young men like Williams to older adults who embrace a positive way of life. Nevertheless, Brown never stops worrying about him and others like him. One of Brown’s biggest fears, he said, is that their painful pasts will lead to self-destruction – or what he calls “suicide by streets.” 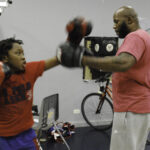